I've continued to make slow but steady progress with my experiment to setup Rails development environments using nix-shell on a Vagrant VM running Ubuntu. I've now got to the stage where I have four Rails apps using combinations of Ruby versions, Rails versions, PostgreSQL versions, and MySQL versions which I'm pretty happy about! 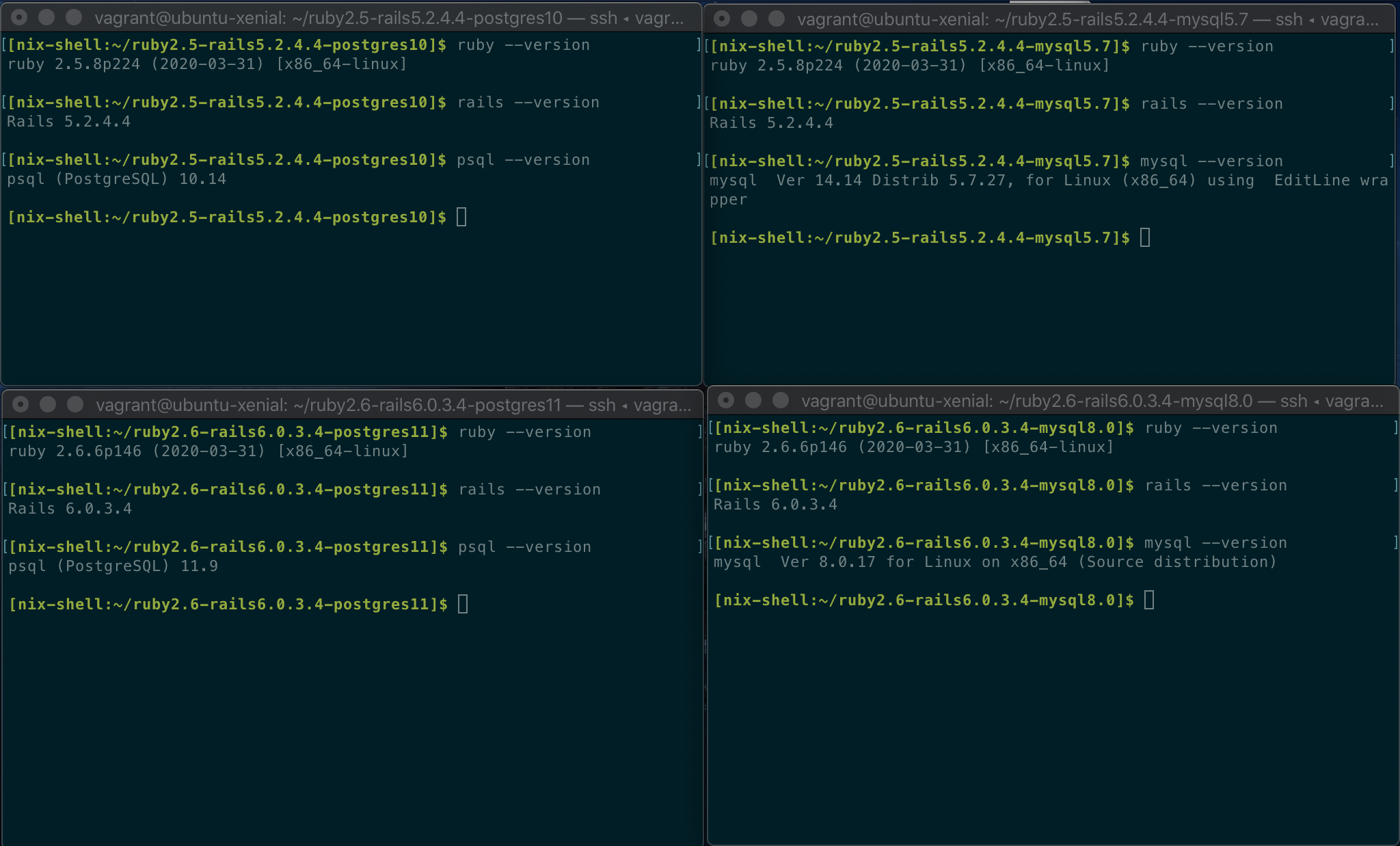 I've continued to use bash scripts as Vagrant provisioners to do this in a reproducible way, although the code is currently a bit messier than I would like.

I've improved the way that rails new is run so that it works correctly for different versions of Ruby. The new approach closely based on this answer to a question I asked on the NixOS forums.

Some of the complications around having a suitable environment to run rails new for a particular version of Ruby and of Rails has reminded me that I don't have a particularly good solution for this in my current non-Nix MacOS setup.

In fact I tend to do something analagous to what I've done with Nix, i.e. I use rbenv to switch to the relevant version of Ruby, create a Gemfile containing just a reference to the version of the Rails gem that I want, run bundle install and then rails new. I'd be interested to hear if anyone has a better/simpler way of doing this.

A shell.nix is used to run bundix to generate a gemset.nix and to run rails new using this gemset.

Inside the rails app directory there's another bundler.nix (exactly the same as the one above) which is again only used to run bundle lock and another shell.nix which is used both to run bundix and to provide the actual development environment including all the relevant dependencies:

One other thing I had to deal with to handle Rails v5 was to run rails yarn:install instead of rails webpacker:install for Rails v6 when initally setting up the app.

I've added a shellHook to the development environment shell.nix to configure and run an instance of a database server for each Rails app. I'm now less sure that configuring and running a database on entering the nix-shell is very sensible. I suspect it might make more sense to have a separate script to do this.

This time I've made a couple of changes to improve the level of isolation between the apps. Firstly I've configured each database to store their data in a Rails app sub-directory rather than in a global location. And secondly I've configured each database to only accept connections via a unix domain socket also stored in a Rails app sub-directory.

I managed to achieve the former by moving the Rails apps under the Vagrant user's home directory. This avoided the problem I had previously with hard links in a VirtualBox shared directory. Although this means the Rails app source code is not available from the guest OS, that seems like just a temporary inconvenience since I'm only using the Vagrant VM to simulate a fresh machine. Eventually my aim is to run Nix natively and not use Vagrant at all.

I'm particularly pleased with the unix domain socket solution, because it means there's no need to identify an unused port for each Rails app to connect over TCP/IP. Here's the shellHook code for PostgreSQL and MySQL databases:

I'm definitely no expert on setting up databases, so if you can suggest any improvements, I'd love to hear from you!

I'm pretty happy with where I've got to. It's starting to feel as if I have a solid basis for using Nix to create decent isolated development environments using various versions of Ruby, Rails, PostgreSQL & MySQL on the same machine.

One nice side-benefit is the way dependencies on OS package are made more explicit. And I don't think it would take much more work to have reproducible configurations to share with other developers and/or for use in continuous integration and/or deployments.

As usual the source code is available in a GitHub repository and there are instructions on how to run it yourself in the README.